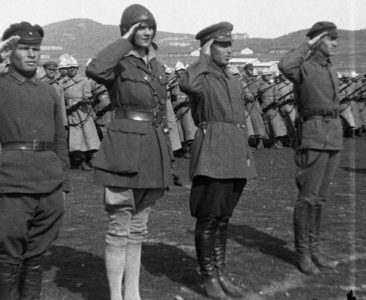 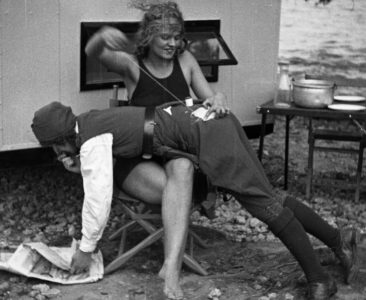 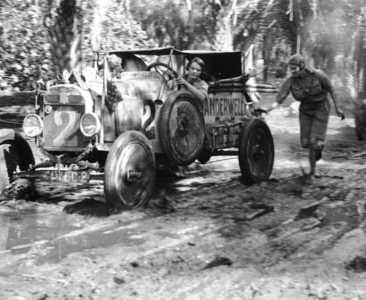 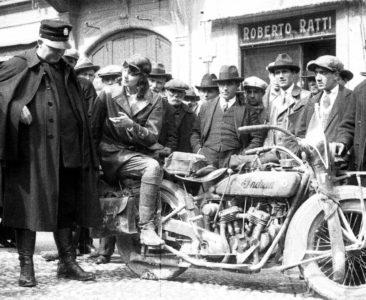 First Woman to Drive Around the World

The Story of a World Traveler

After her father was killed in action at Ypres in June 1917, her mother moved Idris and her younger sister to Europe. As the Great War drew to a close, Idris was enrolled in a convent school in France.

Devastated by the death of her father, young Idris displayed a restless spirit and was constantly at odds with her superiors at the convent school, who tried in vain to transform the 6 foot tall self-described “tomboy” into a proper young lady. Instead, inspired by the fantastic tales she read in her father’s beloved collection of boyhood books, Idris dreamed of travel, adventure, and intrigue in far-flung corners of the globe.

In 1922, when she was 16, an advertisement in the Riviera edition of the Paris Herald caught her eye:

Young Idris could not resist this stirring call to adventure, and she applied for the position as secretary and driver for an ambitious around-the–world expedition led by the self-styled “Captain” Walter Wanderwell, in actuality a Polish national named Valerian Johannes Piecynski.

A former seafarer, world class hiker and traveler who had been briefly jailed in the US as a spy during the war, Wanderwell (known to compatriots as “Cap”), had begun the expedition in 1919 as an effort to promote world peace and the League of Nations.

Founding an organization he called the Work Around the World Educational Club (WAWEC), Walter and his then-wife Nell set out on what was billed as an “million dollar wager endurance race.”

Nell and Walter led competing teams on world tour expeditions, ostensibly to see which team could log the most miles, funding their travels through the sale of souvenir pamphlets, speaking engagements, and screenings of motion picture films they shot and edited on the road.

By 1922, when Idris answered the ad in the Paris Herald, Walter and Nell had long gone their separate ways. Nell’s team was still touring in the US, and Walter, winding his way through Europe in a customized Model T Ford, was desperately in need of a new crewmember fluent in French.

Upon meeting the eager teenager, he was immediately struck by her charisma and adventurous spirit, welcomed her to the crew, and he christened her with a new stage name: “Aloha Wanderwell.”

Aloha quickly became the focal point, the star of the Wanderwell Expedition.

Adapting easily to the rigors of life on the road, Aloha found herself filling a dizzying array of job descriptions: actress, photographer, cinematographer, driver, seamstress, laundress, film editor, vaudeville performer, salesperson, interpreter, negotiator, mechanic… and any other chores that might be assigned by the often tyrannical Captain Wanderwell.

It was a most grueling adventure, carrying the wide-eyed Aloha through 43 countries on four continents.

The expedition journeyed through France and its battlefields… swept through Italy just as Mussolini and the Fascisti were consolidating their power… braved food riots and hostile mobs in Germany, a country then reeling from the harsh reparations demanded by the victorious allies of World War I… camped at the foot of the Great Sphinx in Egypt’s Valley of the Kings… drove into Palestine, where the Jews were attempting to build a new nation… across the arid lands of India, towing the Model Ts across rivers by water buffalo…

Aloha traversed the highlands of Portuguese East Africa, and nearly died of thirst in the Sudanese desert… disguised herself as a man and prayed in Mecca… hunted elephants in Indo-China, became a confidante of Chinese bandits and was even granted the title of “Honorary Colonel” in the Red Army of Siberia… and hob-nobbed with Mary Pickford and Douglas Fairbanks during a visit to Hollywood.

Along the way Aloha fell in love with Captain Wanderwell – who was not yet divorced from his first wife, Nell; in fact, upon their arrival in the United States, Walter himself was brought in for questioning on charges of “white slavery,” which turned out to be a ploy by Nell to force a more favorable divorce settlement.

Eventually, Aloha and Walter married in California during the American leg of their expedition. They had two children, Nile and Valri.

By 1929, when they had concluded their initial trek across the globe and released their documentary WITH CAR AND CAMERA AROUND THE WORLD, the Wanderwells had become internationally acclaimed explorers.

Their initial expedition was followed by an even more extraordinary adventure deep in the Mata Grosso region of the Amazon basin, when their plane went down in the uncharted jungle and Aloha had to remain behind with an indigenous tribe while Walter slowly made his way back to civilization to secure replacement parts, a trek that took several months.

The ever-resourceful Aloha charmed the natives, continued filming, and carefully documented their lives. Her film, FLIGHT TO THE STONE AGE BOROROS, was the earliest filmed record of the Bororo tribe and stands today as an important anthropological resource within the Smithsonian Institute’s Human Studies Archive.

After returning to the United States in 1931, the Wanderwells made plans for future expeditions, future films… but their ambitions were cut short by tragedy and scandal.

In December, 1932, the Captain was shot and killed by an unknown assailant on the couple’s 110’ yacht, “The Carma,” in Long Beach, California. Under intense media scrutiny a suspect was tried and acquitted… and Wanderwell’s murder remains one of the most famous unsolved crimes on the West Coast.

After the scandal died down, Aloha married Walter Baker in 1933, a former cameraman with WAWEC.

As Aloha Baker, working closely with her new husband, she continued her travels and went on to have a long and distinguished career as an explorer, documentary filmmaker, and lecturer – with her notoriety as “Aloha Wanderwell, The World’s Most Traveled Girl” a compelling echo from a not-too-distant past when a woman could scarcely dream of a life without borders.

In her later years Aloha carefully tended to her priceless collection of films, photos, journals and artifacts from her travels, and arranged for much of her work to be preserved in various museums and educational institutions throughout the United States.

Aloha passed away in Newport Beach, California, on June 4, 1996.

Aloha Wanderwell Video Biography – Official documentary of the first woman to drive around the world. Her life achievements & global adventures beginning at 16 years old. Born in Canada as Idris Hall, Aloha was drawn to adventure and the thrill of traveling across uncharted roads in faraway lands very early in life.

In 1922, with her mother’s permission, the precocious 14-year-old left school in the south of France to answer a newspaper ad seeking a secretary for a round-the-world expedition. She joined the Work Around the World Educational Club (WAWEC), created by self-proclaimed “Captain” Walter Wanderwell in 1919, which served to promote the newly formed League of Nations.